Market at Dothan is open to accept orders. Orders close Tuesday at 5pm
We use the word “Sustainable” over “Organic”.
You can grow organic without being sustainable, but you cannot be sustainable without utilizing organic practices.

Thank you for your continued support of our local farmers. We count it a privilege to serve you!
Our Website: marketatdothan.locallygrown.net
Order prepayment link: paypal.me/marketatdothan

THE BEET GOES ON

“Last week, I ordered the beets because I have a fun ice cream cookbook that has some, shall we say, unusual flavors. One of the recipes is for Beet ice cream with mascarpone, orange zest, and poppy seeds.

Anyway, the beets arrived, and I had a very large bag filled with beets and some lovely greens. I knew right away I had too many beets for the ice cream, so I started dreaming about what else to make. I really like pickled beets and decided on that.

Now, I have some room in my fridge, but didn’t want to take up too much space storing the greens. As I started cutting them from the roots, I noticed just how lovely they were, which led to a search on beet green recipes. I learned that, yes, you can indeed cook up and eat the greens. I decided to make some rice and fry the greens in some olive oil along with some M@D green onions and garlic salt.

I work from home, and just after I put the oil in the pan and cranked the heat to high, I got an email that I thought I could answer with a quick, simple reply. I left the pan and went to the office to attend to the email. Long story short, my daughter started yelling something from the other room. This was not surprising, as we have a fairly large house where it’s hard to find people, so it happens fairly often. I ignored her calls and concentrated on finishing up the email.  A couple minutes later, she found me in the office and informed me that we had had a fire.

Turns out, a couple TB of olive oil can make a pretty big fire. Thankfully, she was working at the table in our breakfast room and saw an orange glow out of the corner of her eye. The flames were about 2’ tall, extending from the pan over halfway up the microwave suspended above it. She did what any responsible teenager would do, she ran over to the door next to the kitchen and closed it so the fire alarm wouldn’t go off!

After that, she turned off the burner and grabbed the pan and pulled it off the stovetop. The flames died down a bit, and since I didn’t come to her aid right away, she had to decide what to do with the flaming pan. Her first thought was to put a bit of water in the pan!!! By this point, there was a lot of smoke, and her second thought (thank God) was that the water would create a lot more smoke. After that, she just took the pan outside and set it on the brick patio, fire averted.

After the smoke cleared (this was a cold day and we had to have the doors open for about 20 minutes), I finally concentrated on the cooking. We both learned a lot of lessons that day!”

Name Withheld To Protect the Embarrassed 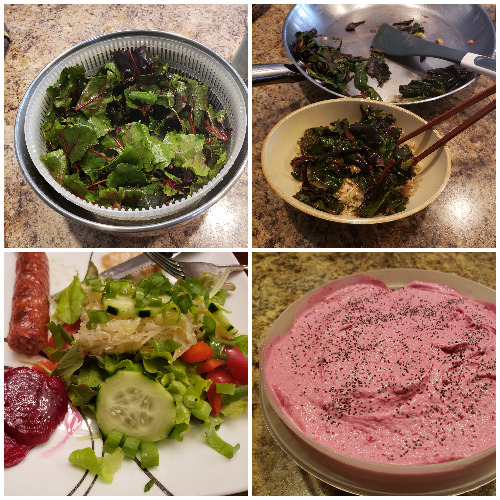 The rest of the story is that the ice cream is “interesing, not my favorite, but fun for a change.”
And there you have it.

DON’T HIT THAT BUTTON! Sometimes folks use the unsubscribe button at the bottom of their weekly M@D newsletter. We’re ok with that if M@D don’t work for you. But if it’s an accident, or a fluke (like what happened to your Manager once), it can really make a mess of things! Besides stopping future newsletters it also deactivates the customer account making it impossible to receive newsletters, get a new password, sign in or order. Neither your Market Manager or our techs can fix this as it’s prohibited by law. Thankfully there’s a way around. If you find yourself in this situation simply create a new customer account that uses a different email.

AVALON FARMS: Thank you for all prayers, thoughts and kind words regarding my farm dog buddy, Zoe. This past week, Zoe took a turn for the worse. When she no longer would wag her tail and just laid there with sad eyes, I knew it was time. I’m sure she’s running heaven’s fields with her friend, Maggie, who left us 2 years ago.
Much love to all ~ Wendy

GRIER ACRES: Jeannie has survived a kidding season and was alone for her first delivery with a first freshner/first time mom.  Anyway, she is in love with the goats and was really upset when we lost one baby from a set of twins.  The other sibling is doing well and gaining weight.  We think the temps and some teat issues led to the kids demise.  We are having a ‘’goat palace” built and are eagerly awaiting its completion.  Our goat barn was severely damaged by Hurricane Michael.  Jeannie insisted the barn be our next project even though our house really needs updating—she loves those animals and they need adequate housing.
We ordered a bunch of seeds thanks for the recommendations.  We tried to get some funky things that might be a little different than the usual.  We are hoping to have some tomatoes especially that we can can with our okra.  We also ordered some onions and can’t wait to try our hand at them.  We would love pointers also on a root cellar.

Aurghhhh!!! It happens EVERY YEAR! Easter approaches and your editor turns to MUSH with the latest Easter Egg fashions (we’ll blame the inspiration on Mary’s cakes this year). Anyway, for your viewing pleasure and in case you want to explore further . . . . Don’t forget that M@D has plenty of eggs for your culinary and creative needs!

We thank you for your interest and support of our efforts to bring you the healthiest, the freshest and the most delicious locally-produced foods possible!

Posted by: Roslyn Horton at Saturday February 27, 2021 04:00 PM CST
THANK YOU for your interest and support of our efforts to bring you the healthiest, freshest and most delicious locally grown foods possible. If you would like to sell through Market at Dothan, please create an account, sign in, and visit the Grower page.
This market is using the Locally Grown online farmers market system. More information about how your market or farm can also use this system can be found at locallygrown.net/faq. Legal information about using this website can be found at locallygrown.net/legal.